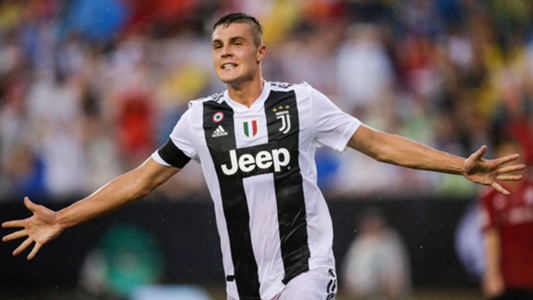 Massimiliano Allegri has confirmed that Andrea Favilli will be sent out on loan to Genoa this season.

The Italian striker took advantage of the absences of every member of Juventus strike force – including newly-acquired superstar Cristiano Ronaldo, World Cup star Mario Mandzukic and Argentina duo Paulo Dybala and Gonzalo Higuain – by scoring a pair of first-half goals to help Juve earn a 2-0 victory over Bayern at Lincoln Financial Field on Wednesday, with his manager confirming after the match the the young forward would be loaned out.

Acquired by Juventus in a €7.5 million (£7m/$m) transfer from Serie B side Ascoli earlier this summer, Allegri confirmed that a loan deal has been struck with Genoa for his services.

“Favilli is a good player,” Allegri said after the match. “He has good potential and capabilities, but he’s going to go to Genoa.

“We are going to loan him out to Genoa this year.”

The 21-year-old took advantage of some shaky play from young Bayern defender Josip Stanicic and goalkeeper Sven Ulreich to net his double on Wednesday. It was an ill-advised Ulreich save of a bad Stanisic back-pass that found Juventus veteran Claudio Marchisio, who fed Favilli’s for the night’s opening goal.

Favili struck again eight minutes later when he ran onto a perfectly-timed pass from Alex Sandro pass to slip behind the Bayern defense and beat an indecisive Ulreich, who was caught off his line.

Favili was always going to find minutes tough to come by given the Turin club’s embarrassment of riches at striker, with the club having added Ronaldo into what was already a crowded group.

But his showing against Bayern bodes well for the 21-year-old, who is primed to experience his first full season in Serie A with Genoa.