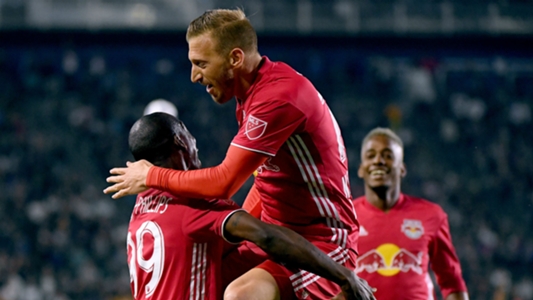 Bradley Wright-Phillips has etched his name in MLS history after netting his 100th league goal for the New York Red Bulls.

The goal came early on in a 1-0 win over D.C. United, with BWP opening the scoring inside two minutes.

He becomes the second player in the league to have reached the century mark this season, with Kei Kamara having hit his 100th goal earlier in the year .

Wright-Phillips is just the 11th player in league history to join the 100-goal club and did it in just 159 appearances – surpassing Taylor Twellman 100 goals in 174 games as the fastest in MLS history to reach the mark.

The forward, who wears the 99 shirt for the Red Bulls, stripped from his red kit to a white Red Bulls kit with the number 100 on it as his celebration for the goal.

The Philadelphia Union were forced to come from behind to take a 3-1 win over the Houston Dynamo.

Mauro Manotas got the home side on the board 10 minutes in, but Alejandro Bedoya found the equalizer just before the break.

A Cory Burke strike in the 70th minute gave the Union their first lead, and they capped off the night with a penalty six minutes into stoppage time.

Raul Ruidiaz opened his account for the Seattle Sounders in a 1-0 win over the San Jose Earthquakes.

The Peruvian striker was signed as a designated player earlier in the summer and took a Cristian Roldan pass off his chest before a classy finish put his club in front.

Ruidiaz ended up playing just over an hour in his first start for the Sounders as he came off soon after his first MLS strike.

The Canadian clubs were also in action on Wednesday night, though not in league play.

Toronto FC rolled to a 3-0 win over the Ottawa Fury to advance to the Canadian Championship final. TFC had already taken a narrow 1-0 win in the first leg of the semifinal tie before rolling over the lower-league opponent in the second leg with goals from Ayo Akinola, Jordan Hamilton and Jonathan Osorio.

The Impact carried a 1-0 lead from the first leg into the night but a Yordy Reyna goal 19 minutes in and a Kamara finish from the penalty spot put the Whitecaps in front, with Vancouver holding on to set up a showdown with Toronto in the final.