If Liverpool hoped Mohamed Salah’s return would add some stardust to their International Champions Cup campaign, then they were right.

The Egyptian returned to action in style in New Jersey, helping Jurgen Klopp’s side to a 2-1 win at a rain-drenched MetLife Stadium. Manchester City, who suffered at the 44-goal man’s hands (or rather, feet) repeatedly last season, were again left to curse the former Roma man’s presence. He is, it seems, the Premier League champions’ tormentor-in-chief.

Salah marked his first game for the Reds since that ill-fated Champions League final appearance with a goal, headed home just 62 seconds after his appearance as a second-half substitiute. If Klopp worried about rustiness, he needn’t have. Liverpool’s star man looked like he hadn’t missed a beat.

So too did Sadio Mane, whose stoppage-time penalty sealed the victory. The Reds have two of their deadly trio back, and their American supporters could hardly have been happier.

Together, Salah and Mane terrified a callow City side. Pep Guardiola’s men, shorn of the majority of their own star names, post-World Cup, led through Leroy Sane but were overwhelmed as Liverpool sent on their big guns from the bench.

These sides served up a host of classics last season, but if they are to cross paths again this season – and it’s easy to imagine they will – then we can only hope it is in rather different settings.

The MetLife Stadium is some arena, a vast, 82,500-seater venue which cost close to $2 billion (£1.5bn) to build. It hosts two NFL teams, the Giants and the Jets, and is among the favourites to stage football’s biggest fixture, the World Cup final, in 2026.

Let’s pray they produce a playing surface worthy of the occasion, if that is to be the case.

Here, it played host to the Premier League’s two most exciting sides, teams who thrilled so many, so regularly last season. Teams who met each other four times and served up 18 goals in the process.

The idea of another classic here was always a little far-fetched, of course. Pre-season is not a time for full-throttle football or for ultra-competitiveness. It is, as a terse Pep Guardiola told Goal before kick off,”about preparation, nothing else.”

Still both Guardiola and Jurgen Klopp might have expected a better pitch on which to continue those preparations. Good enough for Taylor Swift, who performed here last weekend, perhaps, but not fit for football.

“A wet pitch is better than a dry pitch,” a smiling Klopp told us pre-match. He hadn’t seen the “wet pitch” at that point. His grin won’t have lasted long.

Klopp is a regular critic of Premier League surfaces, often bemoaning those which are too dry or where the grass is too long. It grates with rival supporters at times and has led to accusations of excuse-making.

Here, his complaints were entirely understandable. Both Liverpool and City were lucky to get out of this friendly match unscathed.

The grass pitch, installed on top of the regular synthetic surface used for NFL games only 24 hours prior to this fixture, was a shocker. Bumpy and bare, with sand covering the patches where there was no grass, it was a manager’s nightmare, and helped ruin the spectacle for the spectators who braved the New Jersey rain to attend. Players slipped and slid, the ball bobbled unpredictably, and both sets of players looked uneasy, as if playing with the handbrake on. Even assured performers, such as Virgil van Dijk, looked affected. Klopp and Guardiola will have winced every time a challenge went in. 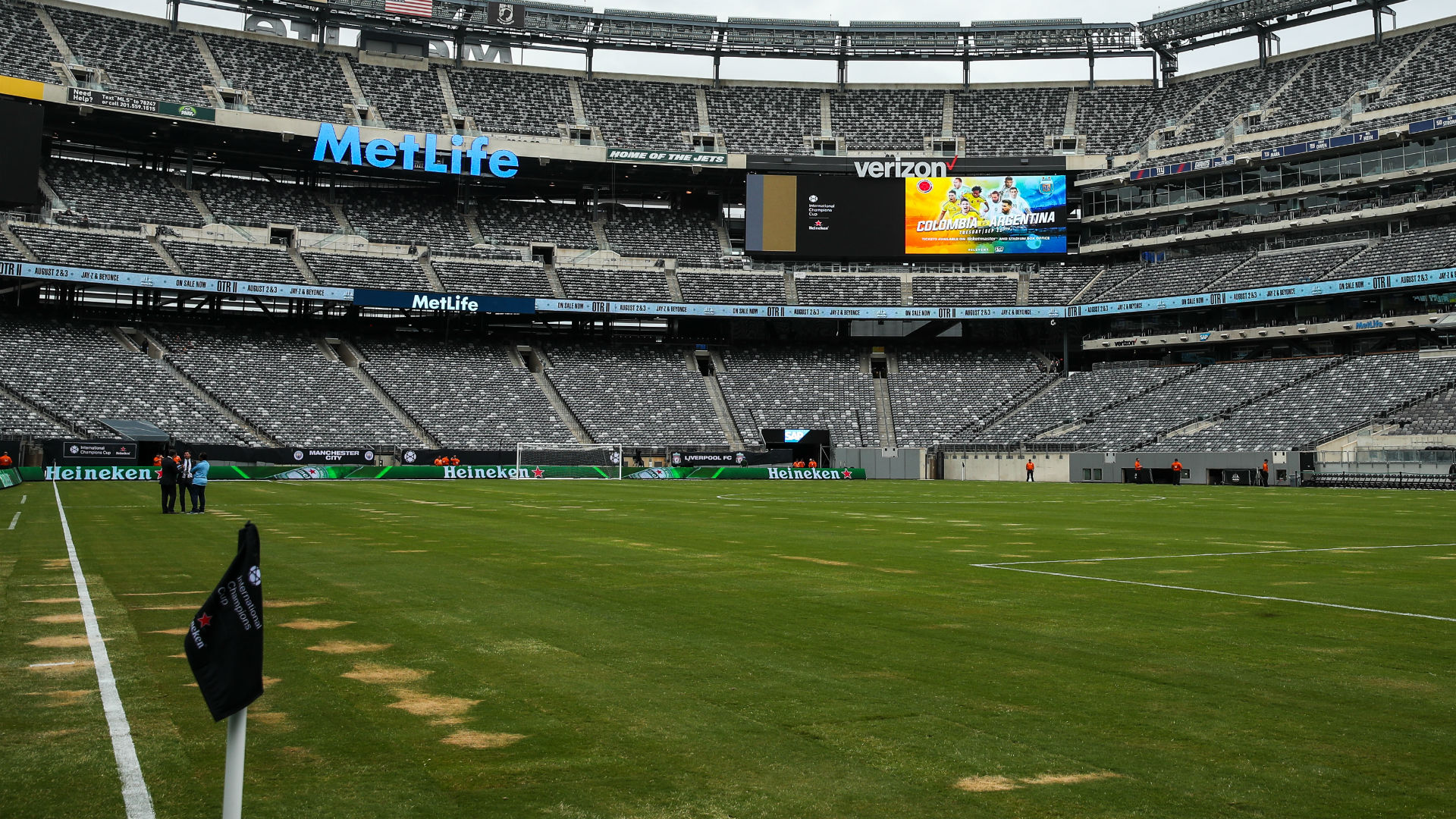 Liverpool, at least, fielded a side which resembled a ‘first team’ with the likes of Van Dijk, Adam Lallana, James Milner and new signing Fabinho all starting. Mo Salah and Sadio Mane, meanwhile, waited in the wings.

City, on the other hand, did not field a single player who started the sides’ Champions League quarter-final second leg meeting back at the Etihad in April. Riyad Mahrez, the first-half’s best player, was a lone star name in a team made up of U23 prospects and Claudio Bravo. Their preparation for the game was not aided by a traffic jam which delayed their arrival at the stadium. “That’s New York for you,” Guardiola joked.

It made for a low-key contest, bitty and slow-paced. What a contrast to those thrilling European ties, or to that Premier League barnstormer back in January. Pre-season ‘glamour friendlies’ are always better in theory than execution, though the game did come to life after the break, first through Sane, whose well-taken finish had City ahead, and then through Liverpool’s African pair.

From the outset, Salah and Mane were sharp, alive and dangerous. Salah’s second touch in the game had the ball in the net, a close-range header from a Rafa Camacho cross. His third touch almost produced a goal too, only for a goal-line block, while within another 60 seconds he’d clipped the bar when through one-on-one with Joe Hart. Talk about an impact substitute.

Mane was lively too, missing a couple of presentable chances before keeping his nerve to send Hart the wrong way from the spot with almost the last kick of the contest. The Senegal star finished last season in fine form, and like Salah he looks ready to pick up where he left off. Good signs indeed, for Klopp and for Liverpool.

City, meanwhile, await the return of their stars, post-World Cup. They could be without Kevin De Bruyne, Vincent Kompany, John Stones, Raheem Sterling, Kyle Walker, Benjamin Mendy and Fabian Delph heading into the new season. A chance, perhaps, for their rivals to steal a march early in the campaign?

Liverpool will certainly hope so. Klopp’s side showed last season that they match, and better, the best team in England. The question is can they be as consistent and as ruthless over a 10-month campaign? Klopp hopes his summer signings, of which two are still yet to feature, will help them to be.

The second leg of their US tour has not been especially kind to them. An eight-hour delay for their flight from Charlotte to New Jersey was a pain, and cost them Naby Keita for this game as he picked up a stiff neck, while the combination of rain and heat pleases nobody.

Throw in a pitch that a Sunday league side would turn their nose up at, and you can see why they will be glad to head to Michigan tomorrow.

At least they avoided injuries, and at least their Egyptian King and their Senegalese star are back doing what they do best.