Needing a historic miracle to get this far, United crashed out of the Europe’s elite club competition after slumping to a 3-0 defeat against Barcelona, 4-0 on aggregate, their deficiencies at this level, both mental and technical, horribly exposed.

Ajax, on the other hand, kept their incredible journey alive, beating Juventus 2-1 at the Allianz Stadium to knock out the reigning Italian champions on their own pitch, adding the scalp to their collection after already humiliating Real Madrid this season.

It was less than two years ago that United and Ajax met in the Europa League final. It was United who ran out comfortable 2-0 winners that night in Stockholm, but the trajectory of the two clubs have since been very different.

For United, the 2016/17 promised to be a watershed year in the post-Sir Alex Ferguson era. Having won the FA Cup under Louis van Gaal the previous May, new manager Jose Mourinho guided the club to League Cup and Europa League trophies, a first ‘double’ since netting the League Cup and Premier League during the 2008/09 campaign. Mourinho was the brought in as the ultimate winner, ready to bring the glory days back to Old Trafford by any means necessary. United had also signed superstar striker Zlatan Ibrahimovic as a short-term boost, broken the world transfer record to buy Paul Pogba back from Juventus and landed a widely heralded creator in Henrikh Mkhitaryan, who came good after a slow start.

It wasn’t perfect. United struggled in the Premier League, finishing sixth, meaning that winning the Europa League was their only hope of getting back into the Champions League. But the building blocks were in place, at least, and the future was potentially bright.

United then spent around £155m on Romelu Lukaku, Nemanja Matic and Victor Lindelof and would go on to finish second in the Premier League in 2017/18, something which Mourinho later described as his greatest achievement – perhaps, in hindsight, he was right. But defeat in the FA Cup final was a disappointment, as was a dismal performance in the Champions League round of 16 against Sevilla. The January arrival of Manchester City target Alexis Sanchez was billed as a coup. Looking back, it was a sign that things weren’t right. The Chilean, who had just turned 29, given a huge contract but was average at best. Arguably that dictated a poor summer transfer window, after which there were reports that club officials had vetoed several Mourinho targets in favour of chasing younger, cheaper talents that could be developed and would also have sell-on value.

In the end, United went into the 2018/19 season with almost the same squad, significantly weakened by the departure of dressing room leader Ibrahimovic the previous March. Mourinho was clearly unhappy, cutting a grumpy figure as early as July, and was sacked in December.

Ole Gunnar Solskjaer papered over the cracks by restoring confidence and overseeing an initial run of 14 wins in his first 17 games in charge. But five defeats in seven games since, coupled with the Norwegian’s own admission that there is ‘work to be done’ on a ‘rebuilding job’, has left United fans under no illusion the return of glory days is not simply around the corner.

What’s more, whether Solskjaer has a plan or not, faith among fans in the club hierarchy to be able to actually implement positive changes and not merely repeat the poorly conceived yet expensive scatter graph transfer policy of recent years is at an all-time low.

For Ajax, the situation could hardly be more different. The club had won four consecutive Eredivisie titles under the management of Frank de Boer between 2011 and 2014, but European progress had continued to elude them at a time when Dutch football was financially getting left further and further behind the top leagues in England, Spain, Italy and Germany.

But with a good structure, smart recruitment decisions and a continued commitment to identifying, developing and blooding young talent, Ajax have created a new Golden Generation, the scale of which hasn’t been seen in Amsterdam since the likes of Clarence Seedorf, Edgar Davids, Patrick Kluivert and co. were crowned European champions in 1995. Underlining the importance of structure, and where United are still lacking, Ajax appointed Marc Overmars as director of football in 2012 and promoted Edwin van der Sar to chief executive from his previous role as marketing director midway through the 2016/17 campaign.

On the pitch, Ajax have grown together over a period of time. Of the team that started against Juventus this week, Andre Onana, Joel Veltman, Matthijs de Ligt, Lasse Schone, Frenkie de Jong, Hakim Ziyech, Donny van de Beek and David Neres were all in the 18-man squad for the 2017 Europa League final.

Davinson Sanchez was sold to Tottenham for £42m, while captain Davy Klaasssen joined Everton for £25m. The fact that he struggled in England and is now turning out for Werder Bremen, seventh in the Bundesliga at the time of writing, suggests it was a good sale to make way for a rapidly emerging De Jong. 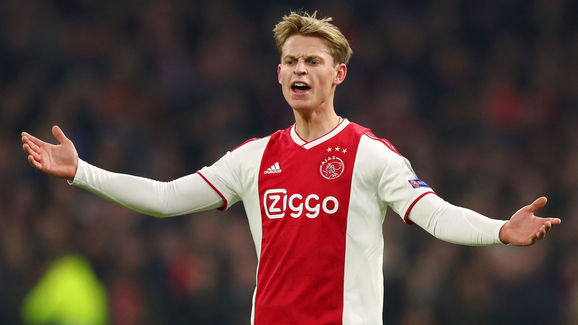 Intelligent and considered signings saw former stars Klaas-Jan Huntelaar and Daley Blind return to the club in 2017 and 2018 respectively. Few would have thought Southampton reject Dusan Tadic to be a worthwhile buy, but the 30-year-old Serbian has been a revelation and was Real Madrid’s chief tormentor in Ajax monumental 4-1 win at the Bernabeu in March.

Having been unbeaten against Bayern Munich in the group stage, knocked out reigning champions Real Madrid and now favourites Juventus, this Ajax team will not be scared of anyone as a fifth European Cup, moving them level with Liverpool and Bayern, becomes a tangible target.