​Images of the potential new AC Milan home kit for the 2019/20 season featuring thinner stripes have been leaked online.

The photos surfaced of the new possible kit on Friday afternoon, and show the likely efforts of shirt manufacturer Puma in only their second time crafting the famous red and black shirt, after two decades of adidas’ handiwork.

The kit shows a return to the stripe-heavy days of 1984, 1999 and 2011, which will likely be welcomed in ​Milan, especially following the uproar that occurred when images of ​Juventus’ alleged new kit leaked online and showed it to have no stripes at all – just block black and white colours.

Gennaro Gattuso’s side penned a long-term partnership with Puma last summer and, though the exact terms of the deal have been kept under wraps in the time since, it has been estimated that the club receive between €12m and €15m per season as part of the deal.

Of course, as with all leaks, it is impossible to know at this stage how accurate these images will turn out to be, and so far the Rossoneri have neither confirmed nor denied their veracity, although the production value seems fairly high to be deemed fake. 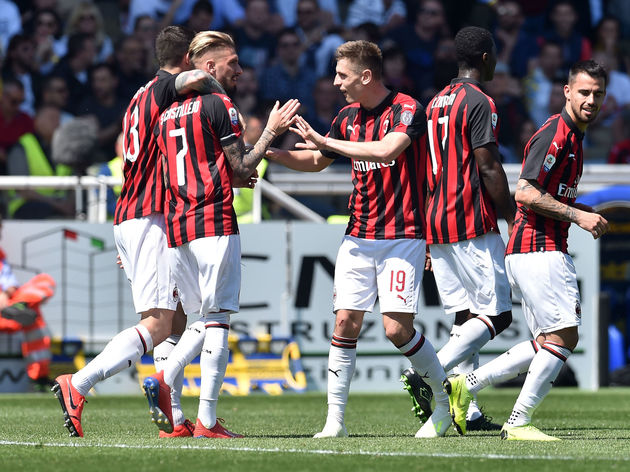 The Rossoneri are currently sat in fourth place, level on points with fifth-placed Atalanta – who beat Napoli 2-1 last weekend – and four points behind Milanese rivals Inter in third, with just five games to go in ​Serie A.

Their next clash will be against Torino on Sunday, before they host Bologna at San Siro the following week.