​Atletico Madrid will look to cement second place in La Liga this Saturday when Real Valladolid arrive at Wanda Metropolitano.

Atleti’s faint hopes of challenging for the title were all but extinguished following a 2-0 loss to Barcelona at the start of April. Their focus now lays in ensuring they pip intercity rivals Real to second place, and they’ll be hoping to carry the momentum of Wednesday night’s impressive 3-2 victory against Valencia into Saturday’s clash with Valladolid.

Los Albivioletas enter the fixture fresh off an impressive victory of their own against relegation rivals Girona and will be fighting tooth and nail to ensure they are playing in Spain’s premier division next season.

Below is the side that Simeone could select for the match. Jan Oblak (GK) – Barring any injuries, Oblak will again be the man trusted by Simeone as his last line of defence. The Slovenian has been named La Liga’s best goalkeeper for the past two seasons and looks set to make it three in a row after another impressive campaign for Los Colchoneros. With David de Gea’s

Juanfran (RB) – Whilst he has shared the right side of defence with Santiago Arias for much of the year, the veteran Spaniard was one of the standout performers in Wednesday’s win over Valencia, providing the assist for Alvaro Morata’s opening goal.

Diego Godin (CB) – The wily Uruguayan looks like he’s coming towards the end of his Atleti career. He has been the rock around which Simeone has built this great side, and continues to show week in week out why he is one of the most respected defenders in European football.

Stefan Savic (CB) – With Jose Gimenez recently joining Lucas Hernandez on the injury list, Simeone will again look to Savic to partner Godin at the heart of his defence.

Filipe Luis (LB) – As the only recognised left back in the Atleti squad, the veteran Brazilian will make up an experienced back four. While Simeone has experimented with Saul Niguez slotting in out of position, Luis put in a solid performance on Wednesday that should be enough to retain his place. 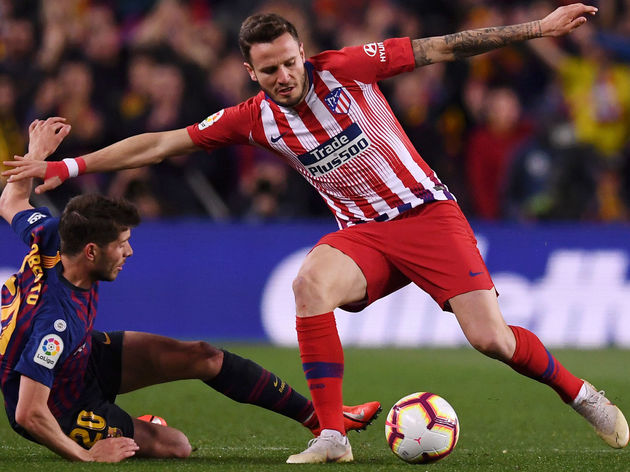 Angel Correa (RM) – The Argentine winger has had to do most of his damage from the bench this season, but his thunderbolt of a winner on Thursday night ought to be enough to earn him a start.

Saul Niguez (CM) – The Spanish midfielder has been attracting a lot of attention from some of the Premier League’s biggest clubs in recent months, and it’s easy to see why. Since breaking into Simeone’s side back in 2014, Saul has been ever present and has been key to Atletico’s success over the past five years.

Rodrigo (CM) – Another Atleti midfielder who has been turning heads in Manchester. At just 21 years of age, Rodri looks to have all the tools to become one of the finest defensive midfielders in Europe.

Thomas Lemar (LM) – Another man who has failed to nail down a starting position, despite his hefty £70m price tag. However, with a goal and an assist in his last two games, Lemar is finally beginning to hit his straps. Expect him to continue this fine run of form on Saturday afternoon. Antoine Griezmann (ST) – With another goal on Thursday night, Griezmann took his tally for the season to 21, meaning he has broken the 20 goal barrier in all competitions in every year he has been at Atletico. Whilst an array of other strikers have been and gone, the World Cup winner has been the goalscorer that Simeone has always been able to rely upon.

Alvaro Morata (ST) – Fans of Chelsea would be forgiven for thinking that a completely different player had turned up in Madrid. With six goals in 12 appearances since his arrival, Simeone has clearly instilled in Morata the confidence that was so clearly lacking in London.