Nigeria face Algeria in the Africa Cup of Nations semi-finals, hoping to draw level with Egypt and Ghana with the joint-highest appearances in the final of the competition.

Algeria conceded their first goal of the tournament in the quarter-finals against Ivory Coast, proving to be a resilient outfit throughout the AFCON. Nigeria, meanwhile, have sailed relatively smoothly to this stage, with a shock loss to minnows Madagascar in the group stage the only blip on their record.

Check out 90min’s preview for Sunday’s game below.

Algeria right back Youcef Atal picked up a shoulder injury in their the quarter-final clash with Ivory Coast and is a doubt for the game. Mehdi Zeffane is expected to take his place. 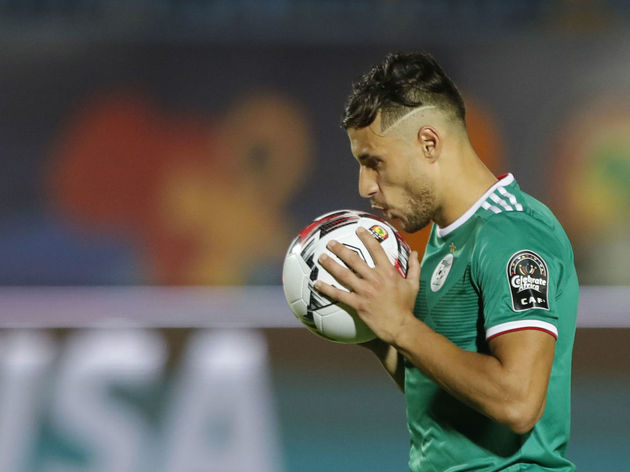 Nigeria, meanwhile, are expected to remain unchanged, with Samuel Chukwueze likely to remain in the starting XI, after scoring in the 2-1 quarter final victory over South Africa – previously Moses Simon was in the team ahead of him.

In all competitions, Algeria have beaten the Super Eagles seven times, losing nine and drawing three – making the clashes between the two sides extremely competitive. In recent years the two have met twice, with Nigeria winning 3-1 in 2016 and Algeria scoring three without reply a year later – again demonstrating how closely the teams are matched historically.

Algeria have been dominant throughout this year’s AFCON, scoring nine and conceding zero in their opening four games.

Ivory Coast provided a sterner challenge in the quarter finals, although The Fennecs managed to find a way to go through, winning on penalties to show their resilience and mental toughness. Nigeria have been slightly less impressive, squeezing past Burundi and Guinea to qualify from the group mathematically and then losing 2-0 to Madagascar – perhaps taking their eye off the ball.

3-2 and 2-1 wins against Cameroon and South Africa in the last 16 and quarter finals respectively, however, put the Super Eagles in good stead to challenge the Algerians.

Here’s how each team performed in their last five fixtures:

Nigeria have several good players, including Wilfried Ndidi and ​Alex Iwobi, and they have proven this AFCON that they are capable of scoring goals. However, Algeria have been rock solid defensively all tournament, conceding only one goal in their five games.

Combined with the attacking talents of ​Riyad Mahrez and Yacime Brahimi – an offensive weapon from the bench – their backline should prove enough to overcome Nigeria.