​Never anger Pep Guardiola. That’s what the whole world discovered after only 20 minutes at the Etihad Stadium, as Manchester City put Watford to the sword in the most humiliating of fashion.

The Sky Blues were on the receiving end of some heavy criticism following their disappointing 3-2 defeat to Norwich, which saw Liverpool stretch their lead at the top of the league to five points. 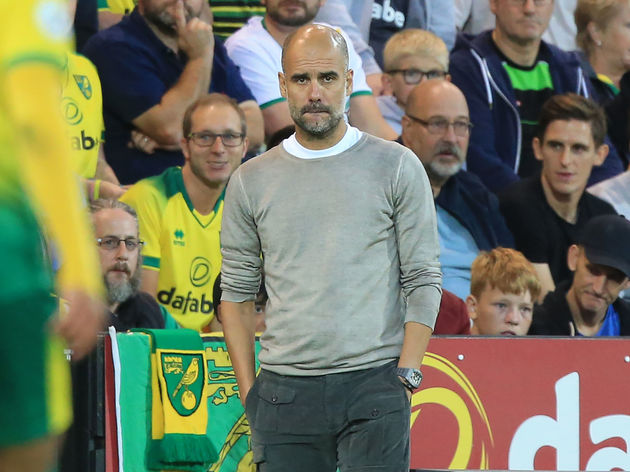 Many questioned if Guardiola’s side had the heart, stomach or strength to battle it out at the Premier League summit for a third consecutive season, and the Spanish boss seemed rattled in his post-match comments.

We have our answer. Man City are in it to win it.

The Premier League Champions took the lead inside the opening minute of the match, ​Kevin de Bruyne doing Kevin de Bruyne things and laying it on a plate for David Silva.

Let’s be honest, Kevin De Bruyne is the best player in the Premier League. And he has been for years.

Kevin de Bruyne with an UNBELIEVABLE ball and David Silva celebrates his reported move to Inter Miami news with a goal.

Could be a long afternoon for Watford.

Luis Miguel Echegaray was right. Watford were in for a very long afternoon indeed.

Don’t say we didn’t warn you either.

And Aguero has doubled the lead from the spot!

This is going to be a long afternoon for Watford. . .#MCIWAT

As the goals rained down at the Etihad Stadium, some of you had some interesting theories behind ​Man City’s destructive display.

Somebody tell Man City that Watford aren’t the same yellow team that beat them last week. Its like they’re out for revenge, but they’ve got the wrong team!   #MCIWAT

What do you think Watford did to Manchester City that we do not know about. There must have been some slight. Some disrespect. Some grudge created

Mahrez added a third and Bernardo Silva tucked away a fourth, as ​Watford seemingly decided to just pack it in for the day and move on with their lives.

It wasn’t all good news though, as Fantasy Football managers up and down the country simultaneously put their heads in their hands when Guardiola’s team was released.

Every single person in the Man City squad, extending to even the reserves of the youth team, getting points today except Raheem Sterling.

You hate to see it. pic.twitter.com/3EtrUylaUe

If things couldn’t get any worse for Watford fans, Nicolas Otamendi, the guy who looked like he’d won a prize to be on the pitch at Carrow Road last week, scored a fifth for the home side, who probably had the game wrapped up at this point.

GOAL! Otamendi, who I have always said is a top player has made it 5-0

Five goals down after 20 minutes, just stop the game already.

Manchester City, who lost against Norwich last week, have scored 5 goals in 18 minutes against Watford.

The same Watford had 31 shots against Arsenal and drew 2-2 after being 2-0 down. pic.twitter.com/TfnY2UEj81

In fairness, Guardiola will be fuming his team didn’t score 91 goals in this game.

Pep Guardiola after beating Watford 90-1: They played really good football, I think they were the better team. We need more teams like them in the PL. On our performance, I will take the scoreline but it was not good enough.”