​Eddie Howe’s Bournemouth are on their worst run of form since this time last season after Jeffery Schlupp scored the only goal of the game for Crystal Palace on Tuesday.

The Cherries dominated the game thanks to Mamadou Sakho’s red card in the opening 20 minutes, but Bournemouth struggled to break down the hosts and were eventually made to pay when Schlupp scored a stunning solo effort on the counter-attack.

The result at Selhurst Park has seen Bournemouth lose their fourth game in a row – which as noted by ​Opta – matches their same poor run of form from last December. It was also the sixth game in a row that Bournemouth have lost in London, where they’ve conceded 20 goals in the process.

In contrast, Crystal Palace have now kept a clean sheet in back to back wins for the first time since the start of the 2018/19 season.

Schlupp’s second-half goal, which was Crystal Palace’s first shot on target, was his 10th in 142 appearances in the Premier League, but it was the first time that the German-born full-back has scored in back-to-back top-flight games in his career.

Back to Bournemouth, and defensive midfielder Jefferson Lerma picked up another yellow card.

The Colombian has now racked up 19 bookings since he moved to the club at the start of last season, which is more than any other player in the Premier League in that time.

Sakho’s first-half dismissal was perhaps no surprise either, as since their inaugural season in the Premier League in 2015/16, Bournemouth have seen their opposition pick up 19 red cards – six more than any other side. 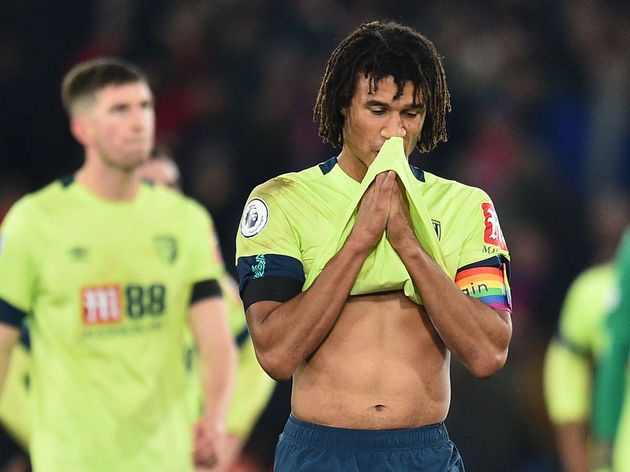 The result has seen Crystal Palace temporarily move up to fifth in the Premier League table, although Roy Hodgson’s side could drop into the bottom half of the table depending on the rest of the midweek results.

Bournemouth, meanwhile, are just four points above the relegation zone after losing their last four games in a row.