Ole Gunnar Solskjaer has claimed that Red Bull Salzburg striker Erling Haaland “already knows what he wants to do” with his future, amid reports he’s set to join Manchester United.

Haaland is said to have already informed Solskjaer of his ​wish to sign for United in the January transfer window, although Juventus, Borussia Dortmund and RB Leipzig are expected to push for his signature as well.

Solskjaer on Erling Haaland: ‘He knows what he wants to do and what he’s gonna do.’ #mufc

Solskjaer recently travelled to Salzburg for talks over the young striker’s future but, speaking after his side’s 1-1 draw with ​Everton

“There’s been plenty of speculation,” he said, “and you know I won’t talk about that, but he [Haaland] has had a great career in Salzburg, so he knows what he wants to do.”

Haaland’s father, former ​Leeds United and ​Manchester City midfielder Alf-Inge, was asked about the rumours by Norwegian outlet ​VG, but he also kept his cards close to his chest.

“I hope you understand that I can’t comment on all the rumours going on now,” he responded simply.

As noted by The Athletic’s David Ornstein, ​United are focused on securing Haaland’s signature in the January transfer window, and they were never interested in a move for Salzburg teammate Takumi Minamino – despite reports suggesting otherwise.

The Japan international is expected to seal a £7.25m move to ​Liverpool in January, and it was reported that they had capitalised on United’s inactivity to strike the deal, but it now appears as though those claims were wide of the mark. 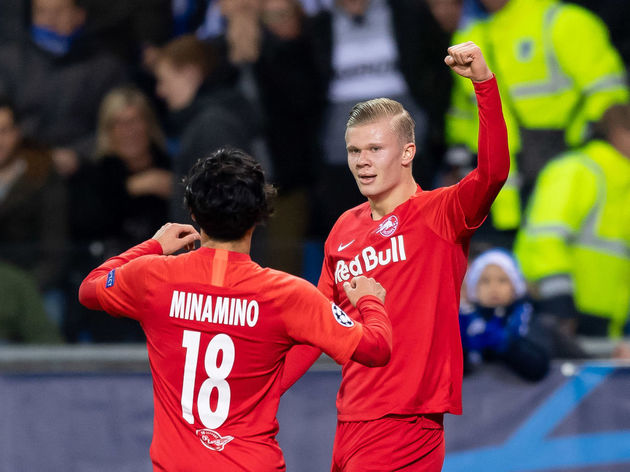 Instead, United remain committed to the idea of recruiting Haaland, and there is a real confidence around Old Trafford that they will be able to get the deal over the line. The striker is open to the move, with Salzburg would sell for the right price.

However, his agent Mino Raiola would prefer Haaland to move elsewhere, with ​Dortmund, ​Juventus and Leipzig all options, so United may have a battle on their hands to fight off the competition.