White often wears glasses herself off the pitch, but the reason behind her celebration is rather bizarre as it is actually a tribute to journeyman French striker Anthony Modeste.

The 31-year-old, who scored prolifically for Köln in Germany prior to joining Chinese Super League side Tianjin Quanjian, before then going AWOL, returning to Köln and suing the CSL club, has celebrated his goals in the same way for years.

“Her favourite player is Anthony Modeste from FC Köln,” White’s father Jon told BBC Radio 5 Live the morning after his daughter’s calm and deadly finish against the Scots.

“Me and my husband are big fans of the German league, the Bundesliga, and one of my favourite players [Modeste] for Köln, that’s his celebration, so for me and Callum [husband], that’s what I do. So it was for him, to be honest,” the player said.

That’s the same Modeste who failed to score once in a nine-game loan at Blackburn in 2012, but he was briefly one of the hottest strikers in Europe a few seasons ago, netting 27 times in 37 games in all competitions for Köln during the 2016/17 campaign.

An experienced international since 2010 and now at her third World Cup, White is expected to lead the line for England throughout the tournament. At club level, she also recently secured a transfer to Manchester City ahead of the 2019/20 Women’s Super League season.

But, with power shifting more and more in favour of the player in the modern game, it is usually them doing the back-stabbing. Ahh, a nice current example. Wherever Adrien Rabiot is mentioned, so is the phrase ‘contract rebel’, and he’s been linked with just about every club under the sun so far this summer.

Rabiot’s back-turning in Paris was not a new experience for the midfielder, after he behaved in similar fashion following his snubbing from the 2018 World Cup squad. After learning said news, he vowed to retire from international football indefinitely, with just 23 years in his legs. Very mature. Of course Roy Keane makes an appearance here. The man just screams fallout, doesn’t he? So it was no surprise when at the start of the 2005/06 season, after this very challenge pictured above had forced him to the sidelines for a sustained period of time, the combative midfielder upped and left Old Trafford by ‘mutual consent’ in November.

‘Mutual consent’ is the nice way of putting it, especially after you’ve publicly criticised your manager’s pre-season set-up, at least six of your teammates’ performances at the start of the season and basically death-stared every other member of staff for 12 years. Yeah, ‘mutual consent’ sounds about right. Everybody talks about Raheem Sterling’s ‘outrageous’ move from Liverpool to Manchester City in 2015, but at least the Reds recouped £52m in the transaction. That’s £52m more than they did when hometown hero Steve McManaman decided he was too big for Anfield.

That’s right, the midfielder left for Real Madrid on a free, thanks to that good old Bosman ruling, leaving the team grieving both the loss of a world-class talent and absolutely zero financial gain. Hell, McManaman didn’t just turn on his team, he turned on his sponsor too, embroiling himself in a year-long dispute with Umbro just before he swapped Merseyside for Madrid. This is the visual footballing representation of Ashley Cole stabbing Arsenal in the back. Good ol’ Cashley. In a famous, famous turn of events, the greatest left back the Premier League has ever seen (and that’s a patented fact) turned his back on the Gunners after they refused to pay him what he was worth.

Which, looking back at it, was cut-throat, but sort of fair enough… 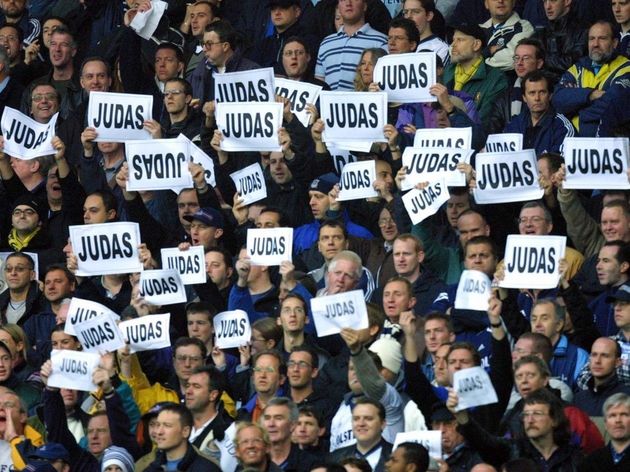 Ahhh yes, Judas himself. Good old Sol Campbell. If you thought Ashley Cole’s journey from north to west London was controversial, then how about Campbell’s swapping of north for, well, north.

Inspired by McManaman’s use of the Bosman ruling to cut ties for no financial reward, the centre back ran his contract down at Spurs, and then ran down the road to Arsenal. It doesn’t get more ruthless than that. …Because, amid cries of ‘hold my beer, Campbell and Cole’, William Gallas went one better than both. That’s right, not only did Gallas turn his back on Chelsea in 2006 – according to an official statement from the club themselves, the defender had vowed to score an own goal in the opening game of the 2006/07 season if he didn’t get his move – he then did the same thing with Arsenal.

After publicly criticising several high-profile teammates (as captain), the Frenchman went and did a Sol by running down his contract, and then did the reverse Sol (after doing the reverse Ashley) by swapping the Gunners for Spurs when the time came. A true ‘turned on their team’ hero.

This article is brought to you by X-Men: Dark Phoenix, in cinemas soon. Check out the trailer below:

Having finished runners-up to Barcelona in La Liga and being ousted from the Champions League at the round of 16 stage by Juventus,

So who could Simeone look to bring in to fill the gaps? It may seem unlikely that the Spanish giants seal a deal for the highly-rated youngster who has attracted interest from both Manchester clubs, Liverpool and Juventus. But with Griezmann set to depart, Simeone will have money to spend.

Felix, 19, no doubt has a bright future ahead of him, and by signing for At 22, the left winger – who can also operate as a striker – has plenty to offer and would be given the freedom to develop further under the Argentine boss.

Players such as as Xabi Alonso, Griezmann, Iñigo Martínez, Asier Illarramendi and Álvaro Odriozola have all graduated from the the Sociedad Academy, and Also a target for Arsenal and Barcelona, there is plenty of competition for his signature. Simeone’s side would have to pay the

giants have already raided the Lisbon-based club back in 2014, having signed goalkeeper Jan The 25-year-old right-back is said to be considering his future at the Camp Nou. Simeone’s side are on the look out for a new right-back as they seek a long-term replacement for Juanfran, and ​Semedo could be the perfect option.

He wouldn’t come on the cheap though, with the Catalan giants demanding a fee in the region of €40m for secure his services. The Portuguese international could be persuaded to make the move to the Spanish capital, as he would likely be guaranteed more game time.

Manchester City are preparing a mammoth £26.6m contract for Benfica wonderkid Joao Felix, in an effort to persuade the youngster to choose the blue half of Manchester.

Felix, who notched a sensational 20 goals and 11 assists in his breakthrough season with the Portuguese giants, has been heavily coveted by the great and good across Europe, but it is City and Manchester United who have emerged as the frontrunners as it stands. And, according to reports in Portuguese publication Record, the Citizens have stepped up their efforts in recent time, laying a £26.6m (€30m) at the feet of the 19-year-old forward.

It is understood that this would be paid out across a five-year deal, meaning he would be earning around £5.32m per year with the Premier League champions.

The release clause in Felix’s current Benfica deal is €120m (£105m) and while neither team have been willing to meet that price yet, the club’s president is already resigned to the prospect of the precocious youngster departing this summer.

Indeed, he believes the only way the club will be able to keep him at the Estadio da Luz beyond this summer is if they sell him with a view to an immediate loan back to the Liga NOS champions.

Speaking to said publication, he explained: “We sit down with players and they say ‘president, I can earn €5m, president, do not make me stay here’.

“Joao Felix had a release clause of €60m and we realised after two or three games that we must increase it to €120m. But it is Joao Felix and his family who will decide if he stays.

“If someone bids €120m it is not worth dreaming that he will stay. We are trying everything to ensure he stays. But the only way is if we sell him and keep him another year.”

This is because Felix, who took part in his country’s UEFA Nations League semi-final victory over Switzerland but was consigned to the bench for Sunday’s victory over the Netherlands in the final, has been irrevocably enticed by the salary he would command in England.

“If not, Joao leaves. There is no room to negotiate further. He doesn’t want to. How will Benfica negotiate with someone after he is given a proposal of €6m after tax?”

The game was broadcast live on BBC One at Sunday teatime and it has been confirmed as the most watched women’s game ever on UK TV after as many as 6.1 million people tuned in.

It smashed the previous national record of four million set in 2017 when England faced the Netherlands in the semi final of that summer’s European Championships.

Not far short of 10% of the entire UK population, 6.1m accounted for 37.8% of the available audience, according to ​BBC, while the viewing figures for the recent Champions League final between Liverpool and Tottenham barely exceeded it, peaking at 6.3m, and an average of 5.5m.

Meanwhile, the launch of ‘Love Island’, one of the most talked TV shows in the country, peaked at 3.3m viewers when it returned to screens for a new series last Monday. 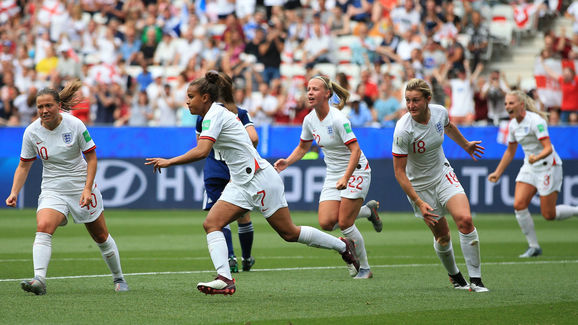 It is yet another sign of significant progress for the women’s game on these shores, and will increasingly help put to bed the archaic view point that people aren’t interested in women’s football, because A LOT of people in the UK quite clearly are.

The game itself was narrowly won 2-1 by England after first half goals from Nikita Parris and Ellen White. Claire Emslie scored Scotland’s first ever Women’s World Cup goal in the second half, making for a nervous end to the game for a Lionesses side ranked third in the world.

With England giving a polished, if not exceptional, performance in the first half, but appearing to somewhat shut down after the interval, it was very much a game of two halves. That led Phil Neville to declare afterwards that his team ‘have a long way to go’ in pursuit of World Cup glory.

“We played really well in the first half. We spoke all week about the style of play we wanted and they delivered and I was pleased with that,” the Lionesses boss said.

“I suppose the disappointment is in the second half we needed to keep the ball better. I suppose the legs get heavy. But we have to keep driving standards.”