A 2-2 draw with Manchester United wasn’t enough to save Mark Hughes from the sack at Southampton.

The Saints have made a disappointing start to the Premier League campaign, taking just nine points from 14 games.

That tally leaves them inside the relegation zone and the south-coast club have taken the decision to bring in a new boss in an attempt to stave off another battle against the drop. 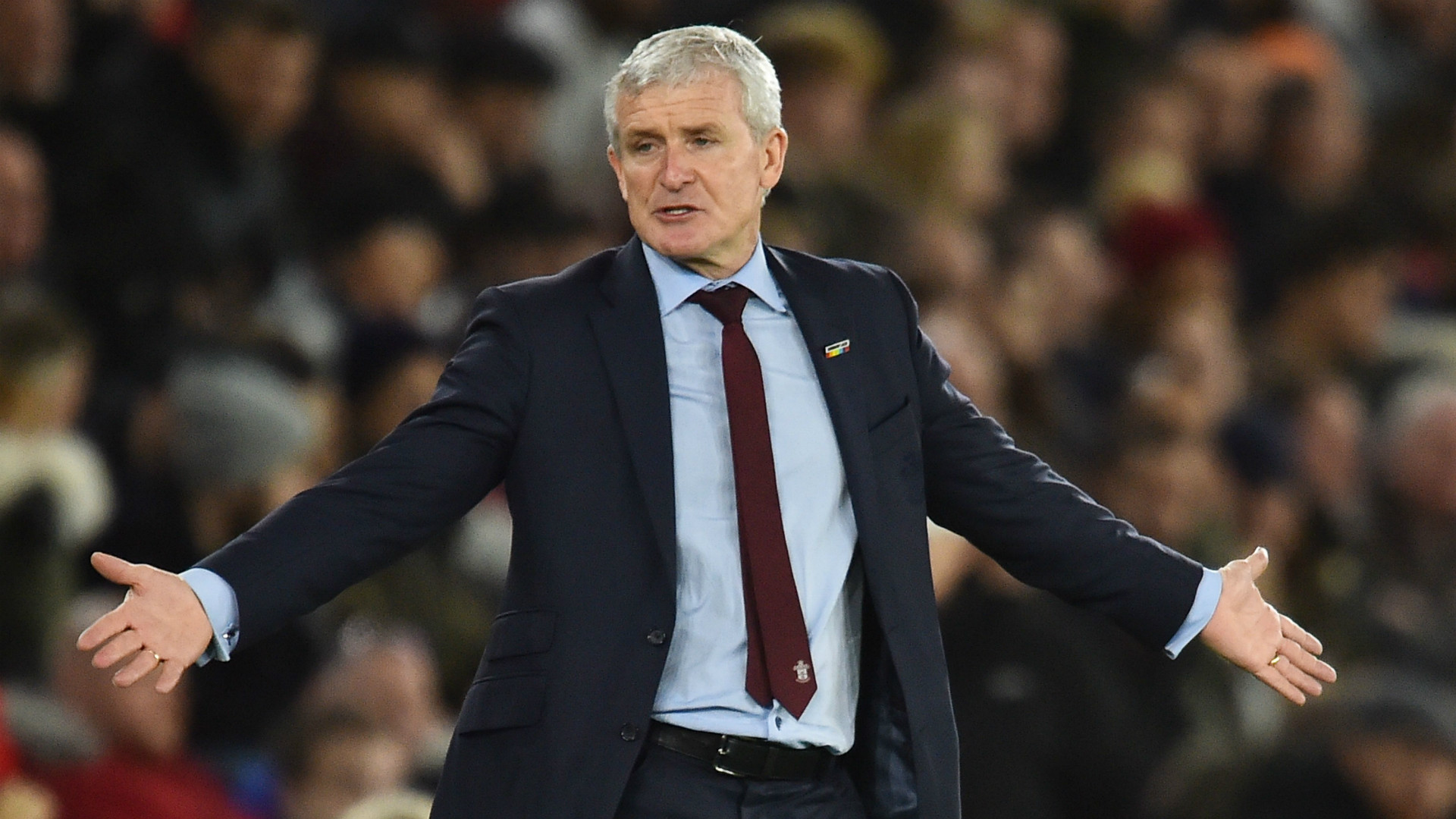 The 51-year-old left RB Leipzig in the summer and reports suggest that the Austrian is Southampton’s first choice in terms of a permanent replacement for Hughes.

“It has pretty much been one way traffic for Ralph Hassenhutl and his price has tumbled considerably in less than an hour,” said William Hill spokesman Joe Crilly. 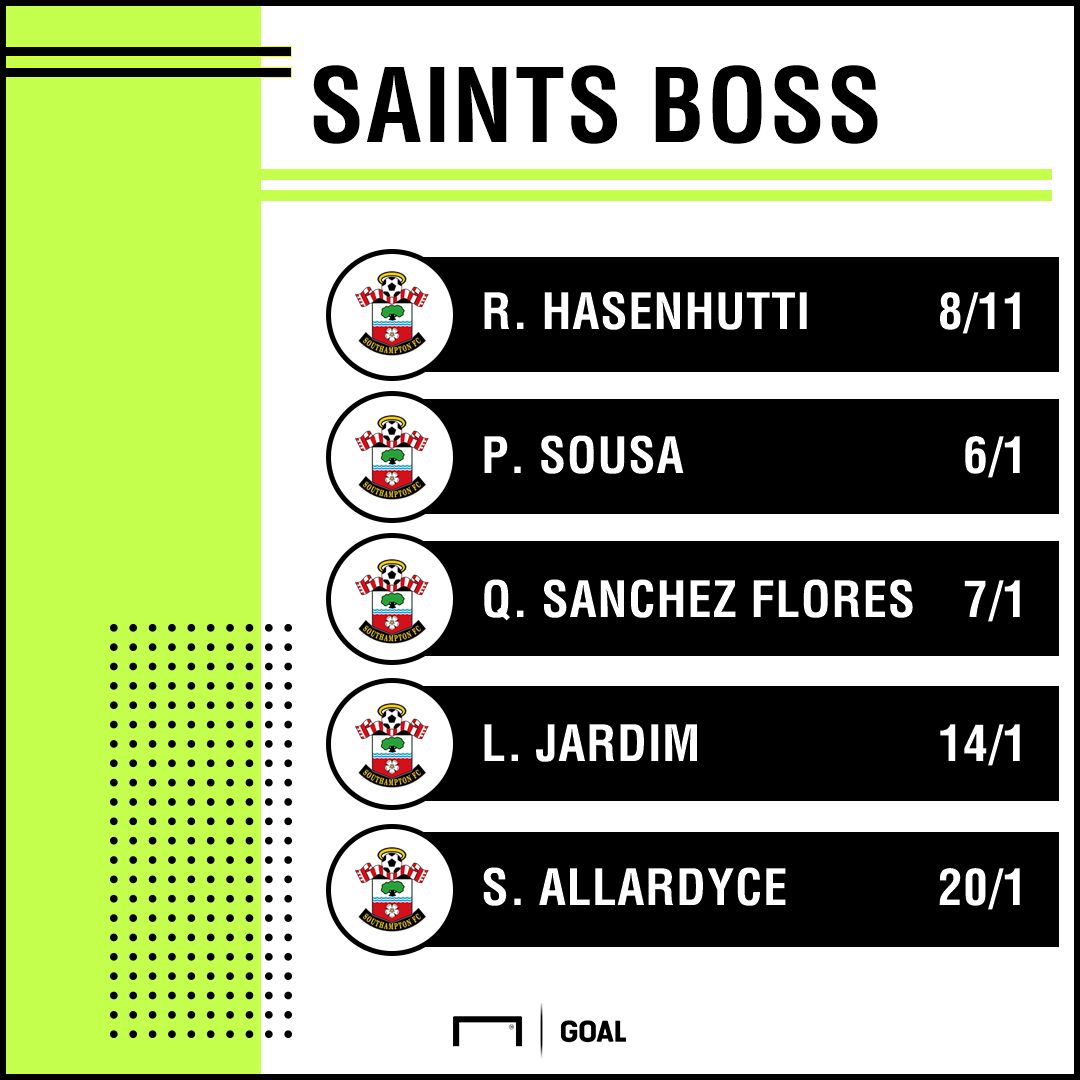 In two years at Leipzig Hasenhutti had a 48 per cent win record and prior to that role he spent time at Ingolstadt, Aalen and Unterhaching. His high tempo approach would likely be a welcome change compared to that which has seen Southampton score just 12 times thus far.

Former Watford boss Quique Sanchez Flores had led the way initially but has since drifted to 7/1 (8.0) following a flurry of support for the new market principle.

Paolo Sousa was pictured in the stands when Southampton took on Fulham recently, prompting rumours that the former Swansea and Leicester boss would also be a contender should the job become available. The Portuguese is 6/1 (7.0) second favourite at the time of writing. 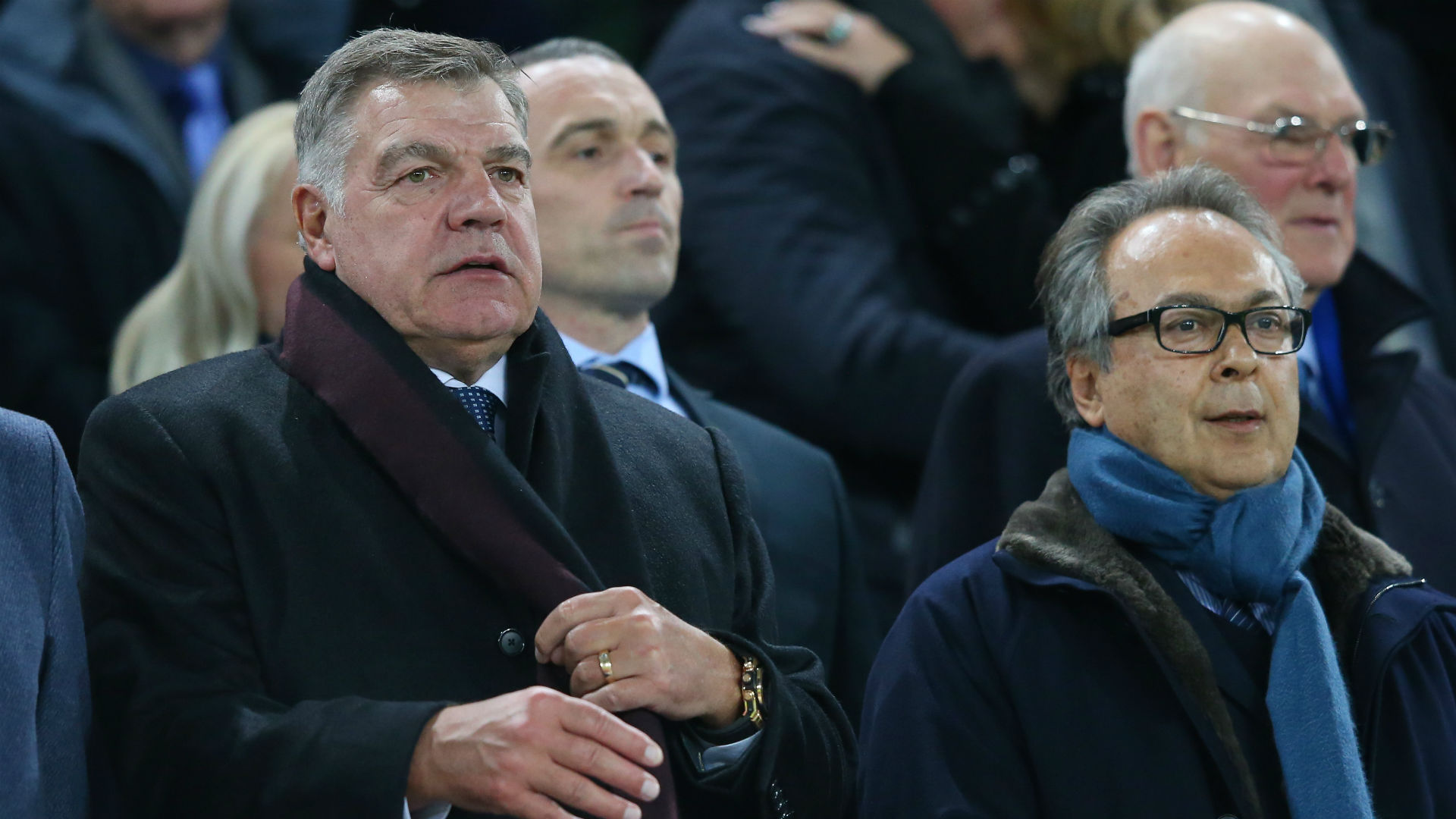 The former Everton and West Ham boss is often heavily linked with jobs where avoiding relegation is the primary objective but the prices suggest Southampton are looking away from the usual candidates such as Allardyce, David Moyes (33/1) and Alan Pardew (25/1).

Kelvin Davies will take charge of the match against Tottenham on Wednesday but at 25/1 (26.0) he’s seen as an unlikely candidate for the full-time role.

With Southampton facing a crunch clash against Cardiff City at the weekend, a swift apppointment may be on the cards and Hasenhutti is certainly the frontrunner according to the odds compilers.

Get the latest odds with William Hill

Bragging rights will be at stake when Brighton welcome Crystal Palace to the Amex Stadium for Tuesday’s Premier League clash.

Although hardly neighbours, the pair have developed a rivalry over the course of their numerous promotion battles in the last few decades.

Having lost just one of their last nine home matches in the league, Chris Hughton’s men are priced at 9/5 (2.80) to send the fans home happy with a precious win here. 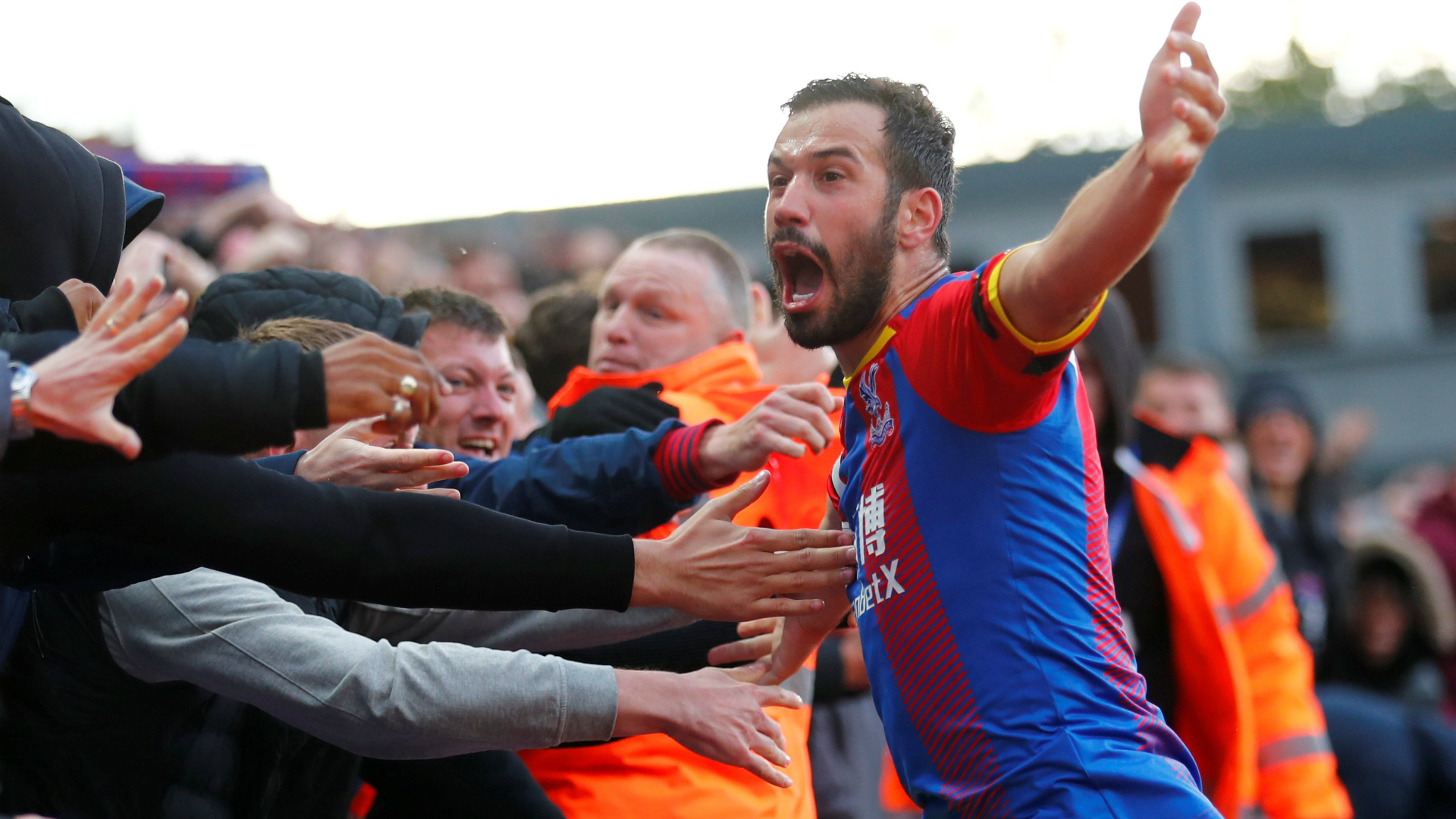 The Eagles recorded their first win in nine league fixtures when they beat Burnley 2-0 on Saturday, and are slight 17/10 (2.70) favourites to come out on top on enemy territory.

This fixture resulted in a 0-0 draw last campaign, and you can get odds of 2/1 (3.00) on the teams cancelling each other out once again.

Bruno will face a late fitness test after limping  off late on in Saturday’s win at Huddersfield, while Alireza Jahanbakhsh remains injured and Dale Stephens serves the final match of his three-game suspension.

Connor Wickham and Scott Dann could both be back in contention following long injury lay-offs, although Christian Benteke is still short of fitness. 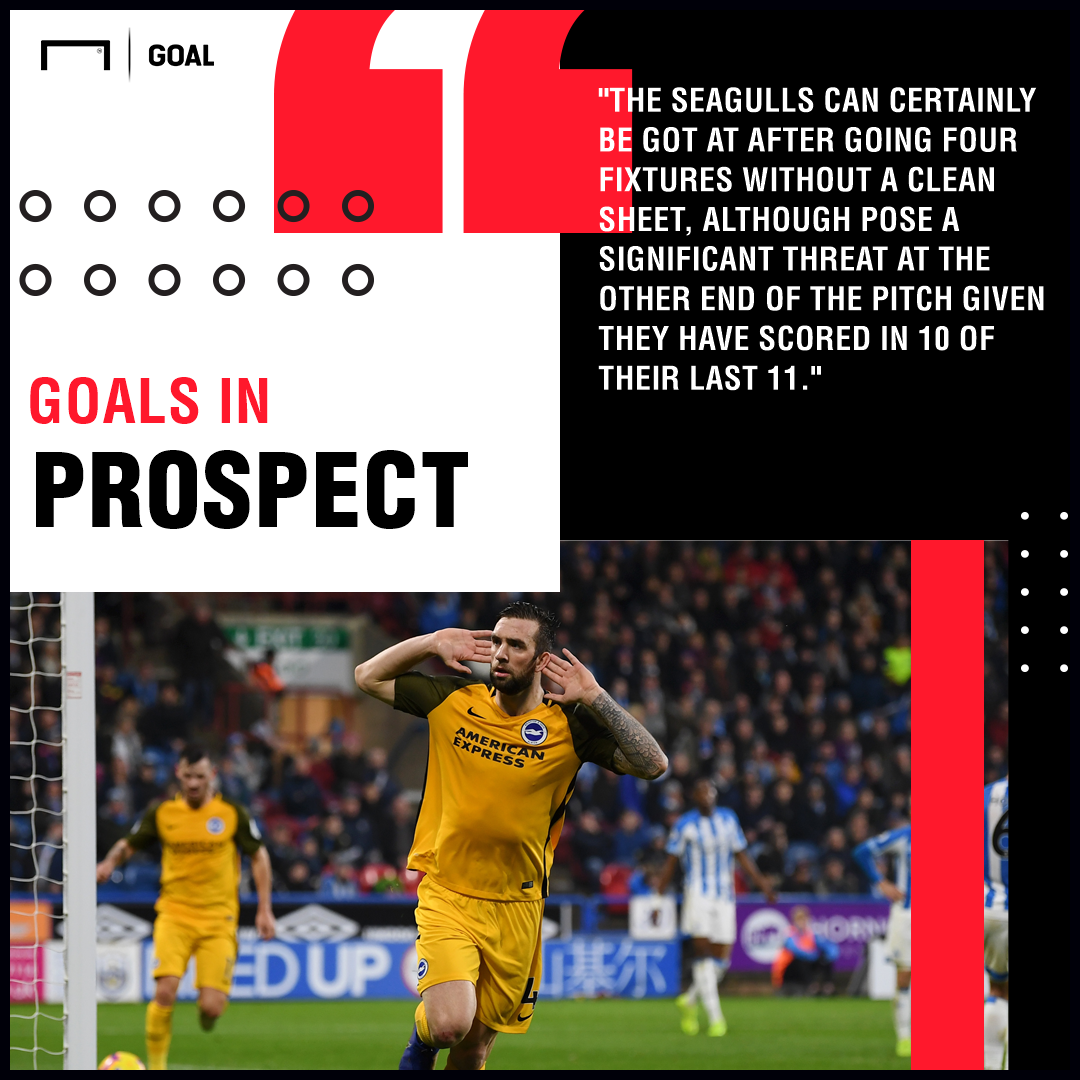 While Benteke and Wickham’s absence is certainly an issue for a team that has struggled for cutting edge this season, Roy Hodgson’s men will still back themselves to cause problems for the hosts after finding the net in five of their seven away matches so far.

The Seagulls can certainly be got at after going four fixtures without a clean sheet, although pose a significant threat at the other end of the pitch given they have scored in 10 of their last 11.

All in all, odds of 21/20 (2.05) look generous on an exciting derby match producing goals at both ends for the third meeting in a row between Brighton and Palace. 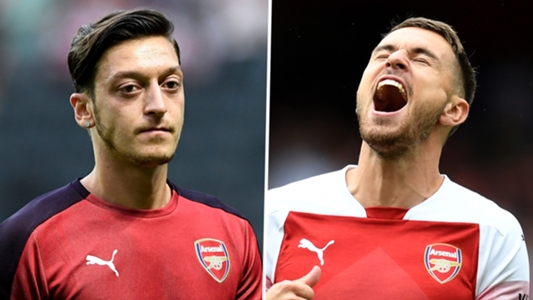 Arsenal would have been better served selling Mesut Ozil and using the money saved on his contract to keep Aaron Ramsey, says Ray Parlour.

The Gunners were forced to dig deep last season in order to keep a World Cup winner on their books, with a lucrative extension agreed in February.

While they were able to get those talks over the line and prevent a key man from dropping into the free agent pool, it appears as though Ramsey will be slipping the net.

The Wales international has seen an offer of fresh terms taken off the table and, despite continuing to impress, is set to move on at the end of the season.

Former Gunners star Parlour believes Arsenal have got their priorities wrong, telling talkSPORT: “My personal decision would be that I’d rather keep Ramsey than Ozil.

“I think Aaron brings a little bit to the team.

“Mesut Ozil is a great player, I’m not doubting that, but you can leave him out. We didn’t miss him [against Tottenham], whereas I thought Ramsey made an impact in the second half.

“Aaron has been there a long time, he’s been there for 10 years, so you’ve got to look that as well.

“Some players would sulk and say, ‘I’m leaving at the end of the season, so it doesn’t really matter’, but his attitude has been spot on.

“He knows he’s leaving at the end of the season, but he was brilliant in midweek in the Europa League.

“I would rather have Aaron Ramsey.”

Ramsey stepped off the bench to provide two assists during Arsenal’s 4-2 derby win over Tottenham on Sunday.

Those efforts saw him set a new Premier League record, with an important contribution being made amid the uncertainty surrounding his future.

Ozil, meanwhile, was nowhere to be seen at Emirates Stadium, with an untimely back problem keeping him out of Unai Emery’s plans. 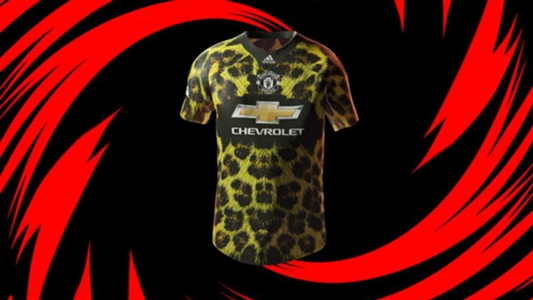 In FIFA 19 Ultimate Team, there’s always a race to find the brightest and most unique kits on the market to make sure your squad steps onto the pitch in style.

While Goal already did the hard work for you with the 10 best kits in the game, EA Sports have partnered with Adidas to release even more outrageous kits for some of Europe’s biggest clubs.

The eye-catching fourth kits for Manchester United, Juventus, Real Madrid and Bayern Munich are available both in-game and in real life. However, you will want to be quick as both the virtual and real-life editions are going to be quite rare.

Any FUT player who had one of said four clubs as their favourite team on FIFA 19 will receive that team’s kit for free in-game when they next log in (Nintendo Switch players will have to wait until December 14.)

For everyone else, starting on November 30 FIFA 19 players can earn each club’s respective kit by completing one of four Weekly Objectives on PlayStation 4, Xbox One or PC. The kits will be tradeable so players can also buy and sell the kits on the FUT Transfer Market.

As for real life, these kits will be sold as limited edition items and won’t come cheap either. While Munich and Madrid’s haven’t appeared in their respective stores yet, fans can purchase the Manchester United and Juventus shirts now for £65 ($83) and £82 ($104) respectively.

There will only be 200 units sold of the Manchester United ‘digital’ kit online which features a striking leopard print design. The kit is a bright fluorescent yellow with dark spots and is designed to look like it is made of fur. The Adidas and Manchester United logos have been moved to the centre of the shirt while the Chevrolet sponsor remains, surrounded by a black patch.

Juventus on the other hand, state there will be 1,000 units of the club’s fourth kit sold online. Juve’s sports a unique iridescent pattern which you certainly wouldn’t have any trouble spotting. According to the club’s official website, the limited edition kit “displays a design that mirrors Juventus’ forward-thinking attitude”.

Next is Real Madrid who have been given a dark blue kit covered in stars. The beautiful kit is more subtle than the rest and appears to represent the club’s nickname of the ‘Galacticos.’ However, the kit may have already sold out as it is listed as out of stock on the club’s website.

Bayern Munich sport a similar star design but on a bright orange kit that fades down into a black. This shirt appears to represent the sun with a bright glare in the middle of the jersey. Also unlike Madrid’s, the Munich kit sports different colour sleeves with a dark red that drifts into the shoulders. 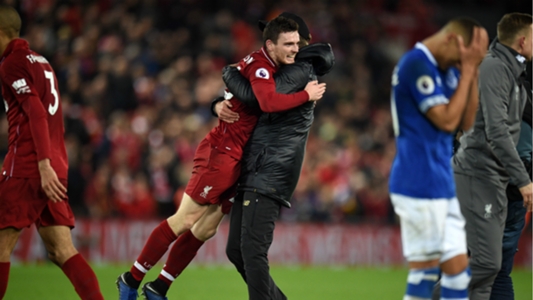 Everton looked to have done enough to earn a deserved point at Anfield on Sunday, only for a freak goal in the sixth minute of stoppage time to gift Liverpool the victory.

Virgil van Dijk tried his luck with 25-yard volley which looped high into the air and appeared to be heading over.

But the ball dropped and hit the bar as Jordan Pickford misjudged it, knocking it down into the goalmouth towards Divock Origi, who was on hand to nod it over the line.

Jurgen Klopp reacted by charging on to the pitch and celebrating with Alisson as the Reds moved back to within two points of Premier League leaders Manchester City, and Robertson praised the team’s character.

“What a finish – he [Origi] just reacted so quickly,” Robertson told Liverpool’s official website . “I’m not sure he knew what to do once the ball went in, but it was a perfectly good goal and we got the three points.

“We knew we were coming up against a different Everton side. I know the manager [Marco Silva] well. They played really well. But this team, we just don’t give up. We’ve gone to the end.

“I’m sure there’ll be a few tired bodies, but it’s well deserved and it’s all worth it when you go home and you’re sitting with your family with three points in the bag.

“Man City had the benefit of playing first this week and we knew they had won, so we didn’t want them getting too far in front. We stay right on their tails – another massive win for us.”

Origi was making his first Premier League appearance of the season when he came off the bench in the 84th minute, and Robertson commended him for having an impact regardless of the winning goal.

“Virgil is trying to claim the assist; I’m not giving him that,” Robertson joked. “I’m not sure what he was trying but he forced the keeper to make an error.

“Divock has hardly played any minutes, but he came on and was brilliant, he ran their defence. That’s what our squad is all about this season – we have got depth in the squad.

“He has been frustrated, of course he has, but he goes and does that. The fans singing his name at the end is well deserved because he has had a tough time and to score a goal in the derby, there is no better feeling. That will give him confidence and will definitely help us.”

The Reds face two away games against Burnley and Bournemouth in the coming days before two crucial home fixtures against Napoli and Manchester United next week.