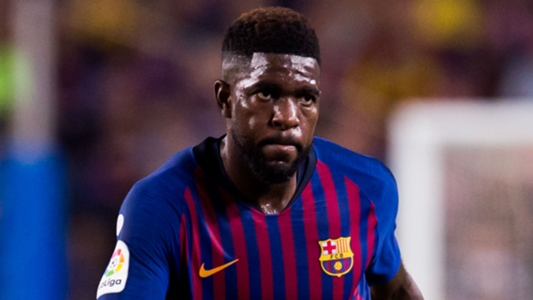 Samuel Umtiti will return to Barcelona on December 30 for further “conservative treatment” on his knee after undergoing therapy in Qatar.

The France international last featured for Barca almost a month ago in Barca’s 1-1 draw at Atletico Madrid on November 24, but a persistent knee issue has troubled him ever since.

Umtiti had been having treatment with specialists in Qatar ever since the end of November.

He has played just seven times in La Liga this term, having also missed two months when the knee injury first flared up in September.

Barca have been severely impacted by injuries at centre-back this term, with Clement Lenglet and Gerard Pique the only fit senior players for the position in Saturday’s 2-0 win over Celta Vigo.

The club are yet to give a return date for Umtiti, though they will be helped by the loan signing of Jeison Murillo in January.

A club statement on Umtiti’s return to Spain read: “Samuel Umtiti was evaluated by the club’s medical services staff at the team’s training centre this morning due to the discomfort in his left knee.

“Samuel Umtiti will return on December 30 to continue undergoing conservative treatment on his knee.

“This conservative treatment plan was announced on December 2, with the goal of allowing him to heal his left knee discomfort.

“The player was in Doha, Qatar in recent weeks for physical therapy treatment under the supervision of the club’s medical services staff.” 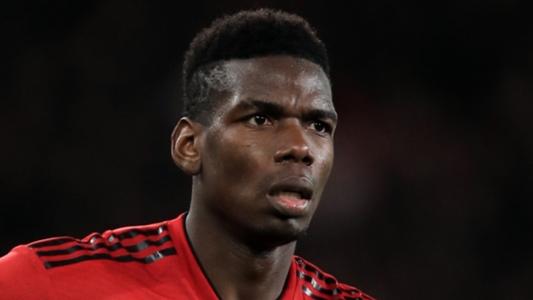 Paul Pogba has not “won a war” against Manchester United, according to Peter Schmeichel, who believes Ole Gunnar Solskjaer can help the France star reach his potential.

Solskjaer’s temporary tenure at United got off to a flying start on Saturday, as the Red Devils hammered his former club Cardiff City 5-1.

Pogba, left out against Liverpool as Jose Mourinho’s spell ended with a 3-1 defeat at Anfield, returned to the side for Solskjaer’s maiden game, and took a starring role with two assists.

Mourinho’s well-publicised issues with the midfielder added to the troubles at Old Trafford, but Schmeichel insists that the club must not allow Pogba to believe that he is bigger than the club.

“Mourinho did put himself in the limelight, not in the correct way or the way that you want the United manager to be,” Schmeichel told BBC Radio 5 Live .

“There were stories about the manager being at war with certain players. That’s happened many times, but the club has always been able to deal with that in the dressing room.

“I want to see Pogba being a United player as good as everything else he does in life.

“He’s absolutely brilliant on social media, and he’s projecting himself to be this incredibly important player.

“We’ve seen it at Juventus, we’ve seen it with France, we haven’t seen it with Manchester United and what’s really important here is that no player, regardless of how much money they make, how much they’ve been bought for, has ever been bigger than the club or the manager.

“This has been now portrayed like Pogba has won a war, this doesn’t work for me, that cannot happen for United.

“It’s now really important that the club deal with this situation. Pogba, or any other player, cannot be bigger than the club.”

And Schmeichel believes that his former team-mate Solskjaer can use his experience as United’s reserve team coach to aid Pogba’s development.

“He’s stuck to the tradition and the history of the club, and respected it all the way, and had a great run as reserve coach for the club, and this is significant, because he was dealing with players like Pogba and Jesse Lingard, and these players that seem to be the players that Mourinho had problems with.

“I think this is key, and the brief that Ole has got is to tame that situation, make someone like Pogba play to the potential that we know already that he has got.” 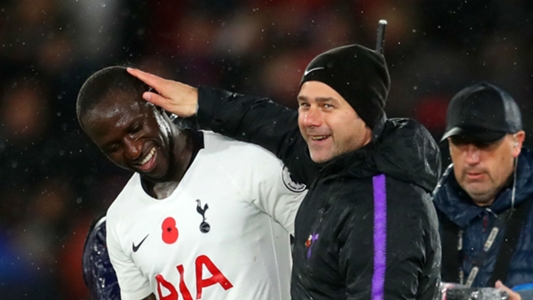 Tottenham’s Moussa Sissoko has claimed he never considered leaving the club, despite struggling to make an impact during his first two seasons.

Sissoko joined Tottenham on deadline day in August 2016, having been on the verge of a move to Everton before Spurs secured his signing from Newcastle United for a reported £30 million ($38m).

The midfielder initially failed to cement a place in Mauricio Pochettino’s side and was often criticised by Tottenham’s fans following the big-money move, but he has become a first-team regular this term.

Sissoko has revealed that, despite his struggles, he never considered pushing for a move away from Tottenham.

“The best thing I have done is to be strong mentally.” he told the Guardian.

“I never give up. In life, you never have to go with your head down. You have to look forward, try to improve, keep fighting and one day things will change.

“I never wanted to leave Spurs. I knew that I could have success here.

“I don’t know if the criticism was unfair. Football is like that. It’s why I wasn’t upset by it. I was upset because I wasn’t doing what I wanted to be doing.

“I had to keep working and I believe I can do better than what I am doing now.”

This one is for our fans
Let’s go to the semi finals ! #COYS #MS17 #CarabaoCup pic.twitter.com/f1JfMj1ehb
— Moussa Sissoko (@MoussaSissoko) December 19, 2018

Sissoko signed for Tottenham on the back of an impressive string of performances in France’s run to the final of Euro 2016, but the 29-year-old missed out on Didier Deschamps’ squad for Les Bleus’ triumphant World Cup 2018 campaign.

“I won’t lie and say it wasn’t painful not to be part of the squad,” Sissoko said.

“So it was extra motivation to perform and show I could be in the squad. I played a lot of games with them and then not to be in the World Cup – it was painful.

“But it’s like that. I’m not regretting. It’s gone. You have to accept the manager has made his choice, and I was very happy when they won.” 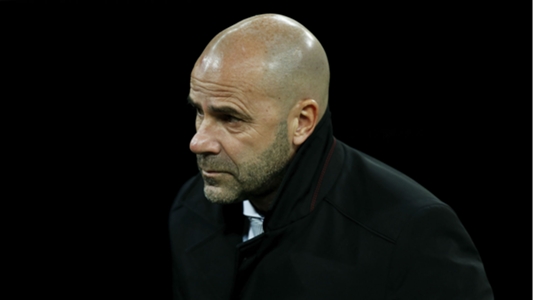 Bayer Leverkusen have confirmed that former Ajax and Borussia Dortmund boss Peter Bosz has been appointed as the Bundesliga club’s next coach.

Leverkusen sit ninth in the Bundesliga table heading into the winter break and, despite securing a third win in four league games by beating Hertha Berlin on Saturday, Heiko Herrlich has been relieved of his duties.

And the club have revealed that Bosz, whose successful 2016-17 campaign with Ajax led to a short-lived stint at Dortmund, which came to an end in December 2017, will take over in the new year, having signed a contract until 2020.

“Until the end we had the conviction and the will to make it with him as head coach. Unfortunately, a stagnation in the development of the team is no longer deniable.”

“He has always shown a special passion for working with young players, that’s why he fits in very well with us.”

Heiko Herrlich has been relieved of his coaching duties at #Bayer04.

Bosz took charge of Ajax in July 2016, and guided the Eredivisie club to the Europa League final – where they were beaten 2-0 by Jose Mourinho’s Manchester United – and a second-placed finish in the Dutch top flight, before taking over at Dortmund.

A seven-match unbeaten run in the league saw Dortmund flying at the start of the campaign, but an eight-game winless streak and no victories in the Champions League group stage resulted in Bosz losing his job at Signal Iduna Park.

While the likes of Jadon Sancho and Reiss Nelson are marking out the Bundesliga as the place to be for Europe’s hottest youngsters looking to move abroad and crack big time, the German top flight is still providing the same platform to its impressive collection home-grown talent.

And few are as impressive as Leverkusen wonderkid Kai Havertz, the honour student among Germany’s latest graduating class.

In October 2016, the now 19-year-old became the club’s youngest ever Bundesliga debutante at the age of 17 years and 126 days, and he’s shown remarkable progression ever since.

Not there weren’t some teething issues, of course; not long after becoming a senior, he was forced to miss a Champions League clash with Atletico Madrid because the match clashed with his exams. It was a reminder that Leverkusen have the most precocious of young talents on their hands. “I’ve never seen such a complete player at his age,” said club captain Lars Bender.

“What he brings to the pitch in terms of play-making, technique and mentality is tremendous,” added Germany international and Leverkusen class-mate Julian Brandt. “He’s so talented he has the right stuff to become a world star.”

He hit an impressive four goals in the first 15 league appearances of his career, but the smart-passing playmaker who likes to work between the lines quickly became better known for creating goals than scoring them.

Havertz etched his name into the record books once again when he set up Karim Bellarabi for the 50,000th goal of the Bundesliga, and then became the fastest player to 10 assists in the league’s history. Havertz was also the youngest player ever to make 50 top-flight appearances in Germany.

The Aachen-born midfielder stands at over 6”2’-tall and cites another left-footed schemer, Mesut Ozil, as his idol. “He has always been a player whom I love to watch and someone whose path I have followed,” Haverz told Spox. “Mesut Ozil is a really great player, who has done a lot for the national team and also his clubs.” 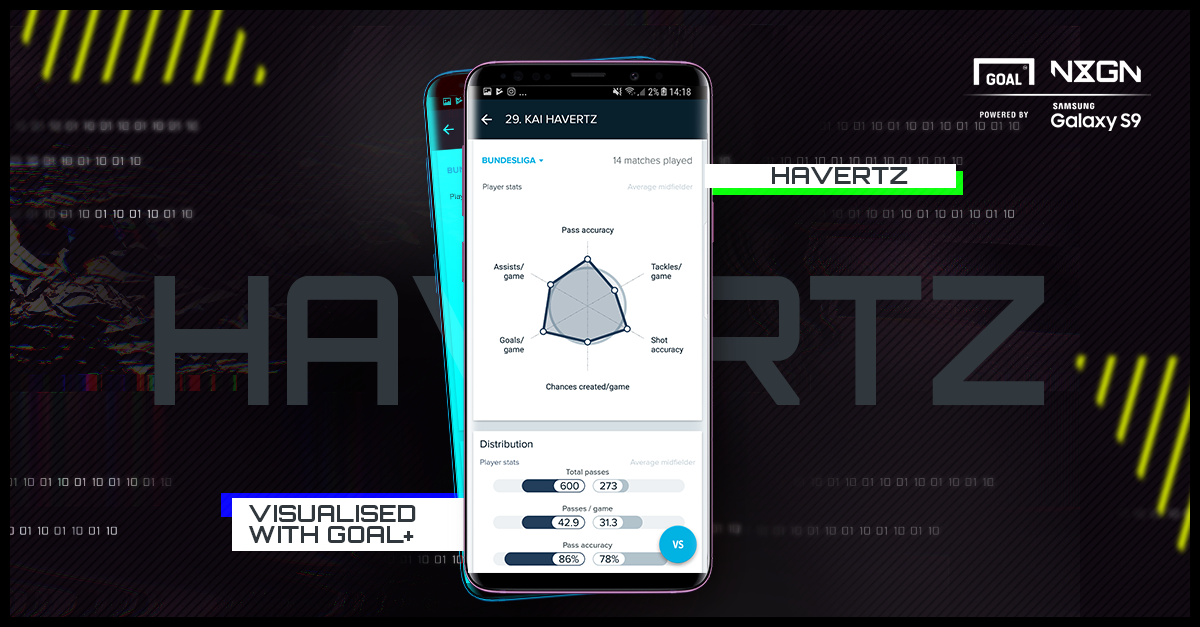 Capped by Germany for the first time this year, Havertz is doing a lot for his club, too. Ahead of the Christmas period, no player has made more than his 16 league appearances for Leverkusen this term and only Kevin Volland (5) has bettered the youngster’s goal return (4).

He’s made a club-high 1.6 dribbles per game and has averaged 0.7 key passes per outing, leading a dynamic and young side that remain one of the most exciting in Germany.

Havertz, though, is taking it all in his stride. “I’ve always been brought up to keep my feet on the ground,” he said.

“I learned from my parents that arrogance and snootiness are not desirable qualities. Why should a footballer be any different to anybody else?”

Kai Havertz, though, is different. And with the humility to compliment his remarkable talent, it won’t be too long before that becomes abundantly clear.