“The way he is at his age, that has really surprised me, I don’t know if after four years, I could be that serious and have a charisma like his to lead a team.

“He is managing that very well. I feel that in this short amount of time I already learned some new things that help my game.

“I can imagine continuing to play for him. But we still don’t know about the future. There are still many question marks.” Despite making clear progress since Arteta’s arrival in December, Arsenal remain ninth in the Premier League table, eight points behind fourth-place Chelsea in the hunt for Champions League qualification.

Mustafi has featured heavily under the new boss, having made only one Premier League appearance this term for the Gunners, prior to the appointment of the former ​Manchester City assistant coach.

​The drawn-out transfer sage that is Arturo Vidal and Inter may finally be reaching its natural end, it appears.

I Nerazzurri have been long-term admirers of the Chilean midfielder, and their determination to enlist his services has only grown since his former coach Antonio Conte arrived at San Siro. But a move has never quite developed. That could all be about to change, though.

Vidal looked set to join Inter in the January transfer window, but a change in management at Barcelona meant that the deal was shelved, and the 32-year-old had the chance to play his way back into la Blaugrana’s plans for the future. ​But ​Calcio Mercato reports that Vidal and Barça are ready to go their separate ways, and with Conte still desperate to add the former Juventus star to his team, a summer transfer looks to be on the cards.

​Barcelona are in need of stripping assets from their wage bill, and given Vidal has fancied a move to Inter since Christmas, his departure seems to be logical for all parties.

The Catalan giants will demand a fee of around £10-15m for the tough-tackling midfielder, who despite his advancing years, is still more than capable of competing at the very highest level.

Conte is keen to bolster his central options with players who have already won trophies and have the experience of success, and ​Vidal has all the credentials to be the Italian coach’s ideal candidate. The Inter boss is also keeping an eye on Bayern star Corentin Tolisso, but since Conte has already worked with Vidal and knows what he’s all about, he is more likely to be the number one target.

Barça are also willing to allow the Chile international to leave fairly amicably, hoping that the transfer will create a strong relationship with ​Inter, which they could then use in their chase for Argentine sensation Lautaro Martinez.

The dream move is almost within your grasp, Arturo.

Long-serving Manchester United defender Rio Ferdinand has doubled down on his statement that the 2019/20 season should be considered null and void, imploring Liverpool fans to ‘think about people’s health’ amid the coronavirus pandemic.

The 41-year-old angered the Liverpool fanbase by suggesting the entire season should be wiped clean, and every division should start afresh from August – which would deny the Reds their first league title in 30 years, despite being 25 points clear at the top of the table. But former Ferdinand has insisted that he holds this opinion purely from a public safety standpoint, and he has set aside all previous rivalries when coming to this decision. Hmm.

“But I think we have to take into consideration – and it hits home again – that football is just a game. As seriously as we all took it, and take it still, it boils down to the fact that it is just a game.

“And the bigger picture is what is going on out in society and that’s why I was very clear and very sure in my own mind that, if there’s not going to be an immediate fix in the next few weeks, then I think the season just needs to be voided and start again next season afresh. “A lot of people like Liverpool fans will always say, ‘Oh that’s because you don’t want ​Liverpool to win the league’. Listen, if my team was in that situation I would think about people’s health and the wider society rather than my own gain.

Ferdinand stated that ‘there are going to be people disappointed’ with this unsatisfactory outcome, but he admitted that ‘not everyone can win in this situation and that’s just a fact.’

No doubt that ​Man Utd fans will be pretty pleased with this outcome, though.

​As one of the most decorated clubs in the history of world football, it’s fair to say that Real Madrid have had many a ‘big game player’ representing the club over the years. How else would they have managed to win a record 13 European Cups?

With honourable mentions to club legends such as Alfredo Di St

With so many wonderful names to choose from, here are the seven players who produced match-winning performances on the biggest stage for Real Madrid. And who will ever forget seeing the Spaniard play in a Bolton Wanderers shirt in 2004/05?

Biggest Moment: His brilliant display in the 1998 Champions League final, as Madrid beat Juventus 1-0. “Where is Del Piero?” sang the Madrid fans of the Old Lady’s star striker. “Hierro has eaten him!” Perhaps the greatest goalkeeper in Real Madrid’s history. Casillas began his career in Los Blancos’ youth system, but he didn’t have to wait long before being first called up to the senior side at the tender age of 16. The Spanish stopper made the number one spot his own at 18 years old, and kept it for well over a decade thereafter.

With an identical record to Hierro above, Casillas won five La Liga titles and three Champions League trophies with the club. But unlike Hierro, Casillas also managed to win international honours with Spain too – bagging the 2010 World Cup, sandwiched in between two European Championship wins, during his 167 international caps.

Biggest Moment: La Decima. Casillas was pivotal in the 2014 Champions League final, where he captained the side against local rivals Atl The man that so many love to hate. Sergio Ramos is notorious for his poor disciplinary record, with 26 career red cards, but is equally renowned for his incredible defensive abilities and leadership skills.

While the Spaniard is often derided for the number of times he’s been given his marching orders, it’s the tenacious part of his game which makes him one of the most feared defenders in world football, and one that strikers really don’t enjoy playing against (just ask Mo Salah).

Ramos has been hoarding trophies ever since his move to Madrid from Seville in 2005, winning While Sergio Ramos might lay claim to being the most disliked Real Madrid player outside of the club, Gareth Bale most certainly holds the title of most disliked player inside the club. And all because the Welshman enjoys a little too much golf, and struggles with the Spanish lingo, apparently.

From an outsider’s perspective, it seems unfathomable that Bale is not revered at Real Madrid. He played a huge role in the club’s historic run of three consecutive Champions League victories, and four in five years. The Real Madrid supporters are a funny bunch, aren’t they?

Before we get to Bale’s most defining moment in a Real Madrid shirt (which you may have guessed from the photo), it’s worth noting that this is a man who has delivered time and time again on the big stage. Who can forget that blistering run from his own half as he scored the winning goal in the 2014 Copa del Rey final against Barcelona? Or when he put his side 2-1 ahead in extra-time of the 2014 Champions League final? But yeah, go ahead and boo him!

Biggest Moment: That bicycle kick against Liverpool in the 2018 Champions League final. With the game finely poised at 1-1, Bale came off the bench and became the first substitute to score twice in a Champions League final, winning himself the man of the match award, and Real Madrid their 13th European Cup. 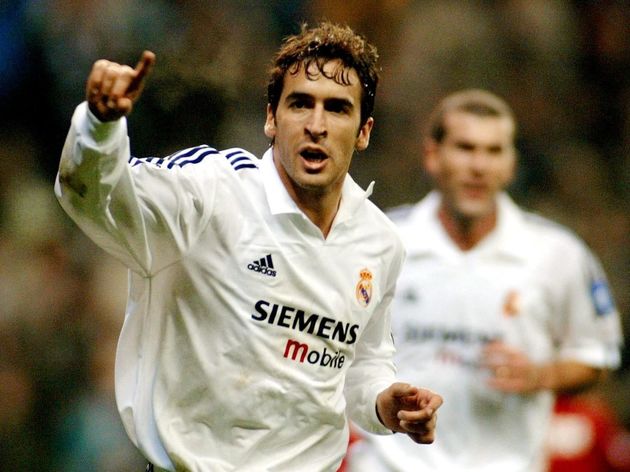 Before a certain Portuguese forward joined the club, Raul was the top goalscorer in Real Madrid history – notching an incredible 323 goals.

While his goals tally may have been bettered in recent years, no one can match him for appearances, as the Spanish striker played a staggering 741 times for Los Blancos – a true club legend.

Raul won six La Liga titles, and three European Cups during his 16 years of service to the club.

Zinedine Zidane has contributed more to Real Madrid’s illustrious history than most. Winning three Champions League trophies as manager is an incredible achievement in itself, but he was also at the peak of his powers during his playing days at the club.

When signing for Madrid from Juventus in 2001, Zizou was indisputably one of the greatest players on the planet. He never failed to live up to the billing at the Bernabeu, winning the Champions League in 2002 and La Liga in 2003, as well as winning the FIFA World Player of the Year award for a third time that same year.

Biggest Moment: Scored what many consider to be the greatest European Cup final goal of all time against Bayer Leverkusen in 2002. As Roberto Carlos’ lofted cross from the left hand side fell from the heavens, Zidane swivelled his body and hit the most magnificent left-footed volley from the edge of the area. 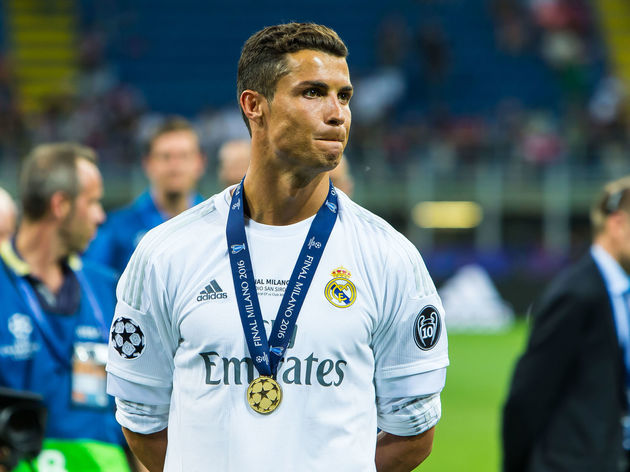 Biggest Moment: The two goals he scored in the 2017 Champions League final, setting Real Madrid on their way to a 4-1 win over Juventus, and helping the side become the first team in the Champions League era to retain the trophy.

​Jose Mourinho is set to sell Kyle Walker-Peters this summer after receiving a public stab in the back from the player.

Not much seems to be going the way of Mourinho in his fledgling Tottenham career. A torrid run have performances have left Spurs out of both the FA Cup and Champions League after to defeats to Norwich and RB Leipzig respectively, while the stagnant Premier League form has left the side languishing eight in the table.

To compound his woes, the former Manchester United manager recently received public criticism from Kyle Walker-Peters recently – who is currently out on loan in the South coast with Southampton. The Saints man, in an interview on the ​Southampton official website, stated that “I think, had he stayed [Pochettino], I’d still be at Tottenham”.

Ever the ruthless leader, Mourinho has, ​as per Football Insider, given the go ahead to Walker-Peters exit in the summer window as he no longer sees him as part of his plans.

While the Englishman had been struggling for game time at the Tottenham Hotspur Stadium anyway before his loan move, it is telling that a player contracted to the club until 2023 – and a product of the academy – could be discarded so easily.

With Southampton not holding an obligation to buy the versatile full-back, it is seemingly unclear as to where his next destination will be. For Mourinho, this unwanted reminder of the man who held the fort so securely before him – Mauricio Pochettino – will be added pressure to the already tense environment he finds himself in.

If, when the season eventually resumes, Spurs’ form does not improve, the former Real Madrid manager may find himself following Walker-Peters out the door.