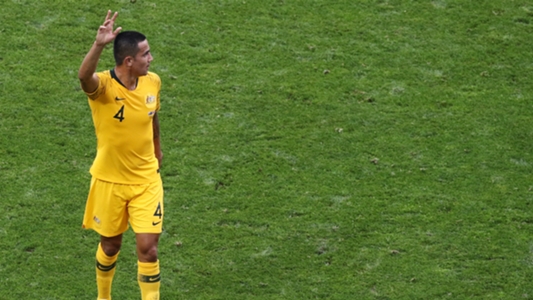 Australia’s all-time leading goal scorer Tim Cahill has retired from international football after appearing in a fourth straight World Cup for the Socceroos.

Cahill came off the bench against Peru in Russia with that brief cameo in a 2-0 loss set to be his final minutes in the green and gold.

The 38-year-old confirmed his retirement from the national team on Tuesday as he ponders his club future after seeing his contract expire with Millwall.

With 107 Socceroos caps to his name, Cahill has bagged an even 50 goals for Australia – including the nation’s first ever World Cup goal in 2006 against Japan.

Just two appearances shy of matching the all-time record for Socceroos caps, there was some specualtion Cahill might play on until 2019 with Australia looking to defend their Asian Cup crown.

He has however decided to hang up the green and gold jersey with the announcement leaving his club future very much up in the air.